You might already be a good batter, or maybe you’re starting out.

Either way, you need the right practice and training. That’s where swing trainers come in.

Why do you need a swing trainer?

From helping you improve your batting technique to being versatile so you can practice anywhere, swing trainers are a valuable piece of equipment if you want to be a better hitter, partly because they remove the need for a pitcher.

The important thing is to know which baseball hitting stick you should choose, based on its pros and cons, as well as how it can help you.

We’ve rounded up the five best baseball swing trainers out there to help you up your game.

You know that practice makes perfect, and when it comes to baseball you need to take the time to perfect your swing.

This isn’t always easy to do on your own or when your coach is not around, which is why a baseball swing trainer can really help you to practice what you’ve learned and improve your skills.

Once you’ve learned the correct baseball form and techniques, and you’re getting some decent hits, you have to continue investing time in honing your skills so that you can increase how often you make contact with the ball.

The more contact you make when batting, the greater chance you’ll have of throwing out hits with greater speed.

Swing trainers can help this process in various ways.

What baseball swing trainers tend to have in common is improving your bat speed, but that’s the least of it.

Many baseball swing trainers make use of technology to offer you guidance – think of it like having your baseball coach with you all the time – so that you keep improving your technique.

For example, some baseball hitting aids use bat innovations like sensors to make you more aware of how you’re hitting so that you can tweak your performance.

There are clearly exciting baseball swing trainer innovations available. But which ones are really worth your time and money?

Here’s a rundown of 5 best baseball swing trainers, and why they’re worth buying.

This is the best overall baseball hitting stick out there, and what makes it so valuable is that it is great for both amateurs and pros.

Whether you’re a right- or left-handed batter, this baseball swing trainer will increase your confidence because it comes with an adjustable pitch height so you can become comfortable with hitting the ball at different heights and from different angles.

Basically, how it works is that the ball is attached to a pole with a string that has a twist-back design so you can hit the ball again and again around the pole. 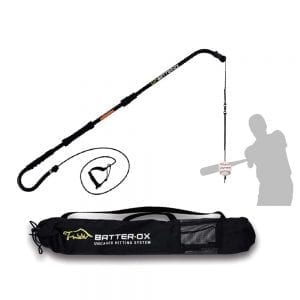 Out of the five best baseball swing trainers in this article, the Batter-Ox comes in at number two, mainly because of its versatility.

This portable and lightweight product weighs only 3lbs, making it easy to carry around.

This means that it simulates real-world pitches, making it a useful batting practice tool for perfecting and boosting your swing. 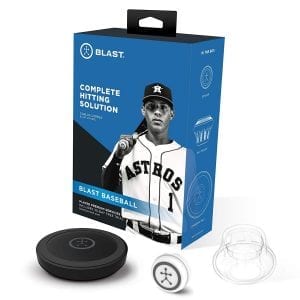 This is an alternative baseball swing trainer device that makes use of sensors, so it’s a powerful gadget in a small 3.5lb package!

It’s perfect if you love gadgets and never go to baseball practice without your phone.

How the Blast Baseball Swing Trainer works is that it comes with a sensor that can be attached to any baseball bat – no special equipment is required – so it can analyze your swing as soon as you start using it. 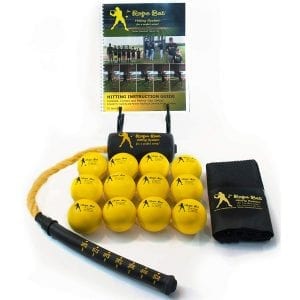 An important element of teaching kids how to improve their swing is to teach them to use their entire body when hitting a ball.

That’s where the Rope Bat comes into our baseball swing trainer reviews.

This hitting system is regarded as a complete one because it provides you with a rope bat and 12 smushballs. 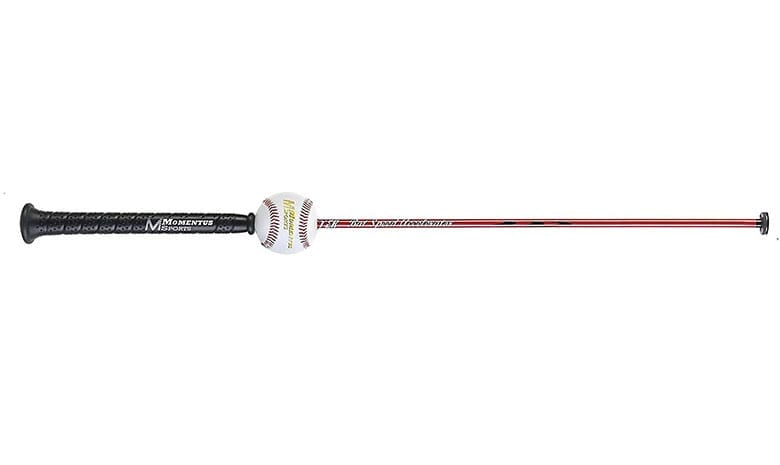 The most notable thing about the Momentus Speed Hitter is that it makes use of sliding ball technology.

What this does is help you to learn to keep your hands inside the ball, which is an important thing that batters need to master when they first start playing baseball.

Keeping your hands inside the ball means that you keep your elbows close to your body, which is important for having better balance and control.

Which Baseball Swing Trainer Is Right For You?

Now that you have all the facts on the 5 best baseball swing trainers, let’s look at which one is right for you, depending on what you can gain the most from each one.

How To Improve Your Baseball Swing?

What Are The Physics Of Baseball Swing?

A baseball swing has two stages. The first one is when the batter stands with his feet shoulder-width apart and holding the bat up and over his shoulder.

He sees the ball coming and he shifts his weight onto his back foot.

He also steps forward with his other foot.

The second stage is when the batter has planted his front foot onto the ground so he can move his body to make the swing.

When he keeps his elbows bent, the bat gains a bit of speed but it stays close to his body, only moving in a small-radius arc, as How Stuff Works explains.

Then, his arms straighten out and the bat is now in a horizontal position. The radius of that arc traces the bat speed, and both increase.

As the bat and ball make contact, the barrel moves at around 70 to 80 mph and has the power to generate over 6,000 watts of power, as the National Aeronautics and Space Administration reports.

How Can Baseball Swing Trainer Help You With Better Batting Average?

Baseball swing trainers do this in various ways, one of the most important being that they help you to boost your confidence.

By letting you practice wherever you are, they give you a practical solution to perfecting your swing.

This has the effect of giving you greater confidence so that you can step up to the plate with conviction.

Some products also improve your batting average by offering you feedback on your swing.

The latter is a particularly valuable feature of swing trainers because the more you practice with feedback, the better you’ll be and you’ll increase your batting average.

What Is Considered A Good Batting Average? (Amateurs) 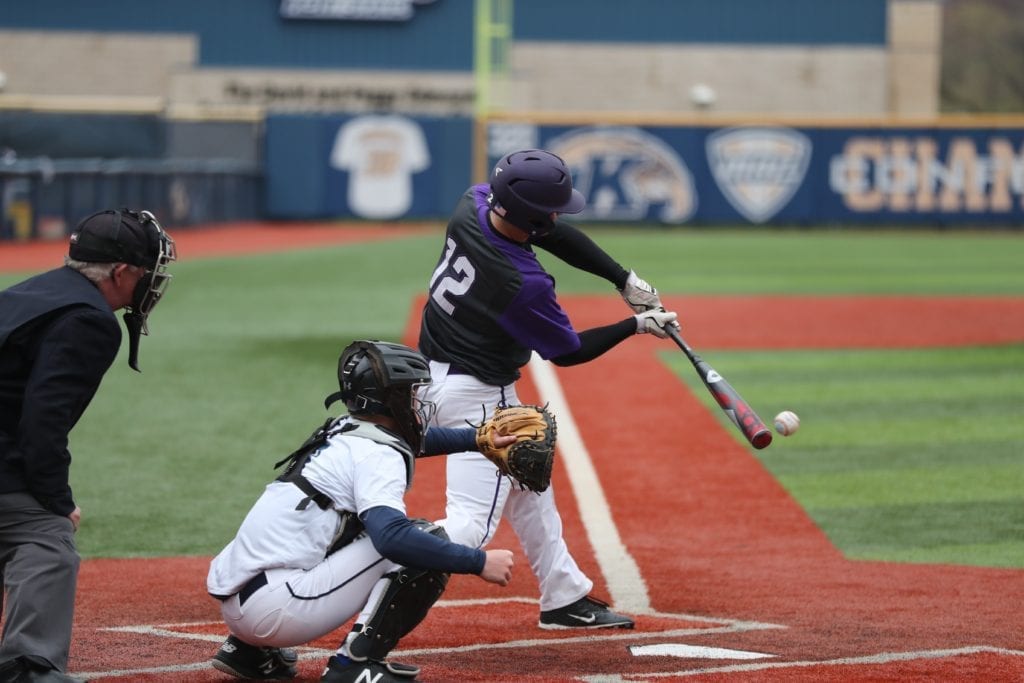 A batting average can be defined as the number of hits divided by the number of at-bats or attempts at hit, as AZCentral reports.

An average batting average of .250 (meaning that you get a hit 25 percent of the time) is thought to be commonplace, so a bit more than that would be considered good.

However, it’s important to bear in mind that a good average can be quite subjective because it depends on the player’s specific abilities.

For example, if you’re a great hitter and your batting creates lots of runs for your team during a baseball game, an average of less than .250 would be fine.

Generally, though, the closer to .300 your batting average, the better you hit.

Can You Use Baseball Swing Trainer For A Softball?

You generally can use a baseball swing trainer for softball.

Even though softball and baseball might be a bit different, they both require a powerful swing and you can therefore benefit from swing trainers if you play either of them.

However, some baseball swing aids, such as the Rope Bat, require that you use the balls provided in the set.

Others, such as the Batter-Ox Baseball Swing Trainer, are more versatile for use with softballs and baseballs.

What’s the “sweet spot” when batting?

This is the area on the bat that is seen as the best spot for the ball to strike.

It reduces vibration and stinging of the hands, while increasing energy in the swing so that the ball can travel further.

Keeping an eye out for the sweet spot when you make contact with the ball can help you to improve your swing. If your hands hurt, then you know you have missed the sweet spot.

How can I add power to my swing? 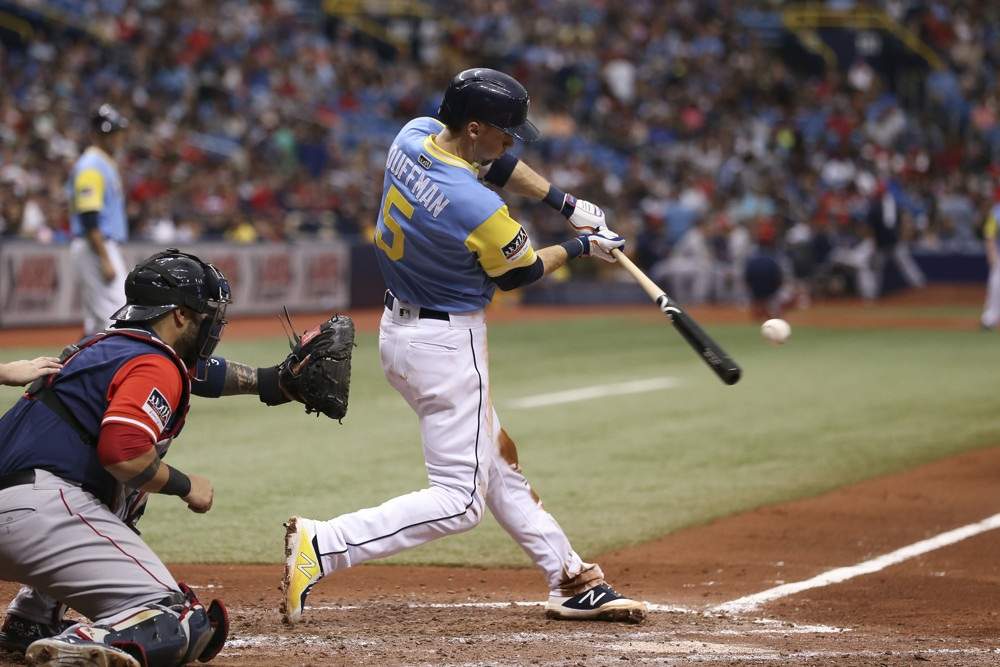 The most important thing is to control your swing.

Instead of increasing speed and power with your arms, generate power through your wrists and hips.

You want the energy to move through your body.

Avoid tightening your muscles as this slows down your swing. Remember, relaxed muscles are fast muscles!

Increasing your batting average and becoming a better batter means improving your swing.

While practice goes a long way to helping you make more contact with the ball, the use of tools such as baseball swing aids make practicing more fun while also helping you get feedback on your form and technique.

Matt is a self-proclaimed baseball fanatic and someone who has played competitively and for fun since early childhood. His expert knowledge and passion for the sport are evident on Batters Report and he hopes to deliver other baseball fans with informative and up to date content on this popular pastime.