More often than not it’s very easy to confuse these two but they are very different. They are both a favorite pastime of millions of people from all over the world. You get to enjoy these games for fun or friendly competition.

Growing up many young kids enjoy little league for baseball and even as adults, most people are involved in teams for softball. This is experienced in most companies that form softball teams to compete.

Professionally baseball has surpassed softball being one of the top played and watched sports in the whole country. It has millions of fans who support different teams and their favorite players. The basics of both softball and baseball are similar where you get to hit a ball and score most runs as compared to the other team. It involves two teams competing against each other even if it’s just a friendly game among colleagues or classmates.

Still, there are huge differences that separate the two which can’t be overlooked hence why they aren’t one and the same game. There is always the constant debate of which among the two is the best. Granted baseball is the most popular of the two. The differences between the two sports are many. There is a difference in the equipment used, the difference in how they are played, etc.

The Difference in Equipment and Gear Used

This difference in circumference distinguishes between the two sports as you can’t use one ball to play both games.

Another distinguishable difference between the two balls is the color. For baseball, the ball is white with red seams while for softball, it’s yellow with red seams.

The bat is a similar piece of equipment in both sports. The only difference is in the length. For baseball, you have to use a bat that measures at 42’ long. When playing as a professional, it must be made using wood and no other material.

For softball, the bat must not exceed 34’ in length. The main material used to make it is aluminum even though you can still use a wooden bat.

There are special gloves worn when playing both baseball and softball. Even though they have numerous similarities, there is a huge difference in the design of the gloves for the two sports. Those for baseball are made smaller because the ball is small. The ones for softball are larger since the ball is bigger. If you mix them up then you might end up having a very frustrating time as you play.

The length is not the only distinguishing factor between the two bats. They have very different barrels. Those used in baseball are thicker than those used in softball. 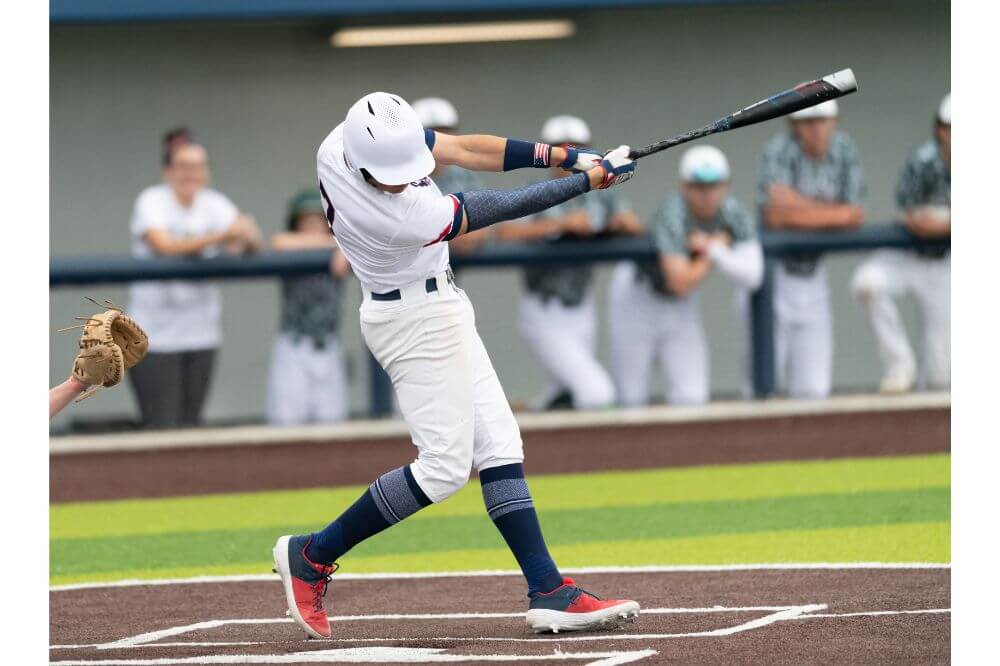 Differences in the Layout of the Field and Players

When it comes to the distance for pitching, the difference is very obvious between the two games. For baseball, this distance has to precise. It must measure at 60ft and 6’, not more, not less. When it comes to softball, the measurements are different because they vary in terms of levels. There are different distances for women and men. For men playing softball, the pitching distance is 46ft while for women it measures at 40ft. there is even a difference in the pitching distance for high schools and colleges with some having it at 40 ft. and others at 43ft.

The baselines measure differently for the two games which are another distinguishing feature. When playing baseball, the baseline has to be at 90ft while for softball it’s at 60ft. This measurement applies to both slow and fast pitch baseball.

The difference between the two areas where the pitcher stands is very noticeable. For baseball, the area is raised in the form of a mound that slopes gently. The maximum height for it measures at 10’ and the radius at 9ft. For softball, the pitcher’s area is relatively flat and circular and need to be marked clearly with white chalk. It has a radius of 8ft.

The games are enjoyed by both children and adults. There is a difference in the number of players with baseball having 9 fielders at any game. When it comes to softball, the fastpitch has 9 fielders while slowpitch has 10.

Even with similarities, how the two sports are played is very different.

When it comes to pitching, a pitcher has to be standing on an elevated mound before he/she can pitch the ball. The pitcher for softball always stands on a flat surface usually with a circle drawn around the area.

Baseball pitchers have to throw the ball overhand while those for softball throw it underhand as per the rules of each. For baseball, the pitching area is further away from the batter than that of softball which is another distinguishing factor when pitching.

This is one of the highest distinguishing factors which explain why baseball is played professionally and softball as mostly a hobby or friendly competition. Professional league baseball players are paid millions of dollars annually and players get endorsements too. As for the softball, the professional league isn’t much to write about and players don’t get paid that much. This explains why most people prefer to play it for fun and take baseball more seriously.

Next time you want to enjoy a sport, make sure you know the difference between softball and baseball. You have to get the right gear and equipment for each and not get them mixed up. How you design the field and play is also very different. Both are played professionally and for fun but should not be confused for one another.