These two sports are known worldwide and enjoy a massive following of loyal fans. They have some of the best players who earn millions of dollars in salaries.

They are both played with similar equipment in that you’ll need a bat and a ball. They may share similarities but there are many differences when you look in-depth on the equipment used, the rules of both games, the size of the field, and even the number of players in a team.

Here the focus is on the differences when it comes to the rules and the equipment used to play both games.

To start, the most basic difference that shows how baseball and cricket boil down to the number of players. As per the rules of baseball, only 9 players can play a match. At times depending on the league and rules, there can be 10 players in total but not more than that. The rest of the players can be used as substitutes during the game.

On the other hand, cricket has a total of 11 players per game. The only substitute allowed is a wicket-keeper.

Size of the Field

Another important rule that displays the difference between baseball and cricket is the size of the field where a professional game is played. A professional baseball game can only be played on a field that measures at 60 feet, 6 inches. This is the distance between the batter and the pitcher’s point.

When it comes to cricket, the distance is slightly higher at 66 feet and it’s between the batsman and the bowler.

Here the only similarity is that both games used umpires as the referees who oversee the games from start to finish. The difference is the number of umpires for each sport. Baseball requires 4 umpires to be present at the major league games. This number can go slightly higher to 6 depending on the league.

For cricket, the number of umpires that oversee a game is 3 umpires in the field, 1 referee, and 1 umpire off the field.

After hitting the ball, in baseball, the batter drops the bat and starts running immediately. This differs from cricket where the batsman carries the bat while running and gets to use it to extend his/her length.

In baseball, players can be replaced as long as they were on the line up for any reason. Once removed, the player is not permitted to return to the field for the duration of that game. There is however the exception of the little league where this is permitted.

In cricket, an injured player can only be replaced for running and fielding. When it comes to bowling, or batting, once a player is injured, that team has to contend playing without them. There can be no substitution for these positions.

Baseball has an automatic procedure for dismissal. This happens when the umpires call the outs as soon as they occur. Some may need to be appealed before being called. Still, this occurs very rarely.

As for cricket, you have to appeal to an umpire for the wicket to be given. This is the only way. The only exception is when a batsman chooses to leave the field out of their volition.

Even though both games require using a bat to play, there is a difference in how the bat is held. For baseball, the bat is held at an angle (cocked) behind the head. It has to be up in the air.

In cricket, the batsman holds the bat vertically upwards in front. The handle of the bat faces upwards and the bottom edge straight down to the ground.

Length of the Bat

The rules are very clear when it comes to the length of the bat that can be used in both games. For baseball, the bat measures at 42’ in length. For cricket, the bat can’t be longer than 38’.

The grand slam occurs in baseball when there is a home run. This happens when all four bases are occupied. For cricket, this number is slightly higher at 6. All of them must have legal delivery to qualify.

How the Field is Shaped

Baseball required the field to be shaped in the form of a 90-degree wedge. This wedge doesn’t require the surrounding area to be specified. This is especially true for the foul ground during a play that keeps the audience and the field separate.

The cricket field needs to be shaped like an ellipse. An ellipse is an elongated circle that resembles an oval shape. The long radius for this shape has to be perpendicular to the batters. 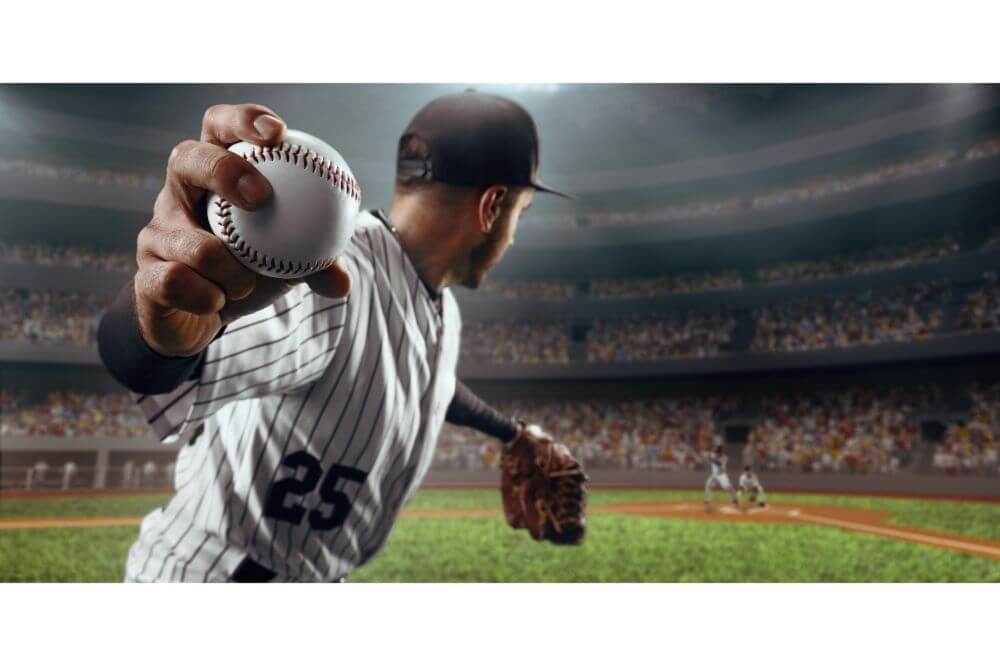 Baseball and cricket both use a bat to play. Without it, both games don’t make any sense. Still, the two bats are very different. The baseball bat is shaped like a button with a round edge. The end where you hold it is tapered. The diameter of the button end has to be exactly 2.625’ with the whole bat measuring at 42’ in length. The bat weighs 1kg making it very light to use for long hours on the field.

The cricket bat, on the other hand, has a flat bottom and a top that has a round handle. As per the rules, the bat has to measure at 38’ in length.  The wide side of the bat with the flat area has to be no more than 4 ¼’ wide. There is a difference in weight that ranges from 1.1 to 2.3 kg.

Another similarity between the two games is indeed the round ball. But there are noticeable differences to keep in mind. The ball used in baseball games has to weigh not less than 5 ounces and not above 5 ¼ ounces. The circumference has to be between 9-9.25 inches.

For cricket, the weight must be between 5.5 to 5.75 ounces. The circumference measures at 8-9 inches.

There is a difference in the color of the ball. In baseball, it’s a white ball with red stitching on its surface.

When playing either of these games, you must have some protective gear given how fast the ball travels and other activities. It’s very easy to get injured in the field. The baseball catchers have to have chest protectors with padding, shin guards made of plastic, and wire masks.

Batters require a hard helmet, a pair of gloves, and at times shin guards. The defense can wear a glove in the hand that doesn’t throw some padding and headgear made from plastic.

The batsman in cricket wears a helmet, padding, and pads. The rest of the team wears no protective gear. The only exception is those who stand close to the batsman.

Baseball and cricket share similarities in that they both require a bat and a ball to play. Still, there are differences between the two that can’t be ignored.

It starts from the way the fields are shaped, to the number of players in each team during a game. The equipment used differs greatly with the bats being different shapes, designs, lengths, and weights. The balls are different in color, circumference, and weight.