Following a baseball game as a beginner will leave you pretty confused. There are several terms unique to the game, and getting to know them will save you from the frustrations and the embarrassment of repeatedly asking for clarification on slang thrown by the game pros and announcers.

For a quick understanding of the baseball matches, some of the things you should prioritize learning are the baseball positions by numbers. This will help you understand what the commentator means when he says something like, “it goes down as 1, 4 put out.”

There are nine positions in baseball, each belonging to one of the baseball player categories, namely the core positions, infielders, and outfielders. Two of the players (core positions) have their position defined by the rules. In contrast, the rest seven posts can be found anywhere in the baseball diamond, depending on the game situation and style of the core players.

Each of the positions is assigned a particular number, which is especially useful in scorekeeping. Read on, as the article discusses the different positions in-depth.

The battery consists of two core players: the pitcher and catcher.

Occupying position number 1 is the pitcher who throws the ball from the pitching mound towards the catcher, and in a way that’s hard for the batter to hit. The hitter stands in the batter box. Nonetheless, the pitcher, being the key player on the defense and the sole influence of how well the play starts, must always try to get the batter to miss the baseball.

The pitcher aims at retiring the hitter by a struck ball or strikeout, whereby the batter fails to connect three consecutive strikes.

An effective pitcher should place accurate throws to different targets in the strike zones. The most elite pitchers have uncanny ability to sequence the pitches strategically to deceive the batter, besides effectively combining pitch location with ball movement and varying speeds.

Pitchers can be left-handed or right-handed, but there exists a preference for left-handed pitchers as they are known to give batters different pitch movements and varying perceptions of pitches.

Assigned number 2 in the baseball numbering system is the catcher. He occupies a spot behind the home plate and in front of the batter. The responsibility of the catcher is to receive the pitcher’s pitches when the batter misses the hit: three successful, consecutive pitches retire the hitter.

Successful catchers act as coaches on the field owing to their diligent defensive positioning, communicating, and calling pitches. It’s common to see a catcher walk up to the pitcher and whisper something into their ear. It could be a word of encouragement or advice about necessary adjustments the pitcher should make.

Catchers conventionally use signs hidden from the offensive to instruct the pitcher on which pitch to throw, sometimes pointing to the location.

Mighty players with quick hands and feet are the best fit for this position. Strength and quickness enable catchers to receive the pitches and release the ball quickly at high velocity to throw out a stealing runner.

When a pitcher throws the baseball on dirt, the catcher must block it using his body; otherwise, the ball getting past him sets the stage for a runner to advance to the base.

The infield players comprise the first baseman, second baseman, shortstop, and third baseman. Infield players are required to have excellent eye-hand coordination and be able to react to a hit ball quickly.

The first baseman occupies a position near the first base, and just like the catcher, can see a lot of action taking place in the baseball diamond. The player is assigned number 3 and is the most involved defensive player, besides the pitcher and catcher.

The primary role of the baseman is to receive throws from other infielders as they try to retire the hitter at the first base. They must, therefore, portray the ability to catch balls successfully and scoop up baseballs from the dirt. The first baseman is also responsible for taking pick-off throws from the pitcher and field bunts.

For this position, size (particularly height) and strength are critical factors while the throwing arm strength is not since there no difficult throws involved. The fact that the first basement is involved in most plays in the games calls for utmost concentration.

This position is best suited for the left-handed players since they can throw to the second base runner for a likely double play without rotating their body.

The second baseman, also known as the middle infielder and assigned number 4 in the baseball numbering system, is positioned between the first and second bases.

Second basemen must demonstrate agility to reach baseballs hit on the left and right quickly. Nonetheless, this position does not require much throwing strength as the player is located on the right side of the infield and near first base.

The player occupying this position faces a unique challenge in that they must face the third baseman or the third stop to receive the throw; however, this hinders the player from seeing the oncoming runner. An excellent second baseman should be able to receive the ball quickly, pivot, and sometimes, sidestep or leap over the incoming runner to complete a double play.

Middle infielders are usually left-handed. This allows them to quickly release the ball to the first base without turning or pivoting. 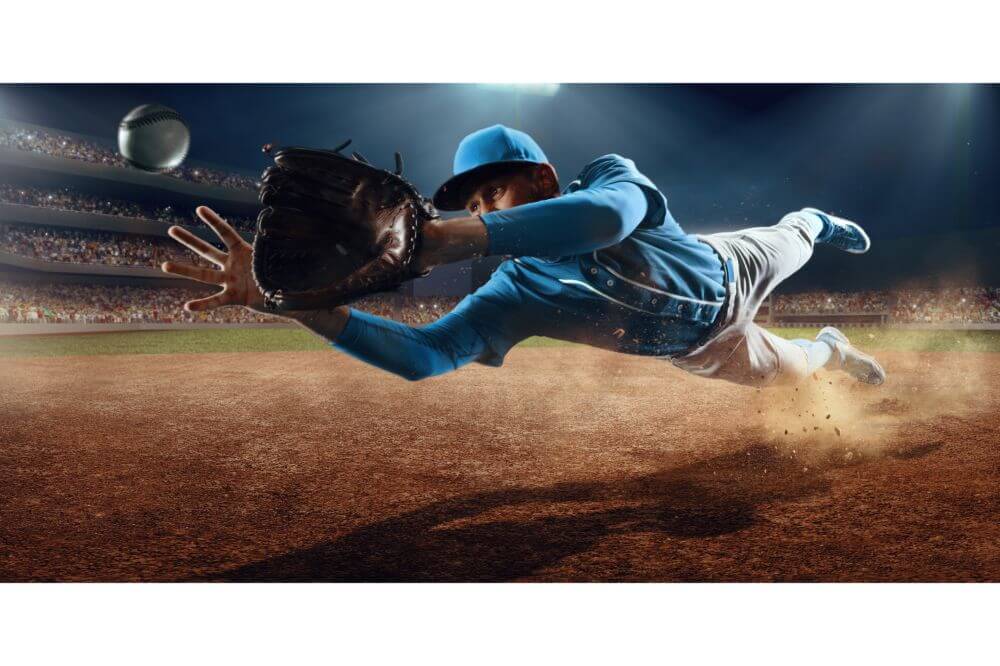 The third baseman, denoted as position 5 in the game’s numbering system, defends the third base besides taking on other essential duties. The third base is nicknamed “the hot corner” since it requires the quickest reaction time on the field.

The third baseman should boast a versatile skill set. Higher arm strength is a necessity in regard to the long-distance throw to the first base. They should be fast enough to handle a bunt from a batter and hard hits from right-hander towards the third baseline.

The third basemen are usually right-handed and a perfect position for the less mobile yet powerful hitters.

Position 6 in the baseball numbering system is known as the shortstop, abbreviated as SS. The shortstop occupies a space between the third and second bases, shading mainly towards the second base.

Shortstops are usually right-handed for quick transitioning from fielding to throwing without extra movements. They cover the most ground and must have high throwing strength to throw balls over a considerably long distance to the first base.

Double plays frequently involve the shortstops, who also serve as the primary communicator to the outfielders in strategic positions with the batters.

Quickness and speed are the critical factors considered when selecting players to occupy the outfield positions due to the substantial ground covered by the outfielders. Still, they should be able to catch fly balls and throw the baseball accurately over long distances.

Occupying position 7 in the baseball numbering system and found on an outfield spot to the left of someone standing at the home plate and facing the pitcher’s mound is the left fielder. The corner outfield position means the player has less territory to cover, and hence ideal for less mobile yet powerful hitters.

This player has the weakest arm of all the outfielders due to the considerably shorter throw distance to the third baseman.

The prevalence of right-handed players in baseball means that a left fielder receives more balls than the right fielder. This calls for the player to demonstrate ample catching and fielding skills. The left fielder will occasionally back up the third base on pick-off attempts from the pitcher or catcher.

The center fielder plays the most important role, besides covering the largest grass area on the defense. Undoubtedly, the center fielder should be among the fastest players on the team. They are assigned position eight on the game’s numbering system.

However, a player who lacks plus speed but boasts an excellent first step can play the center field position. The right step, in this case, means the ability to read the direction of the ball and sprint accordingly.

Being the captain of the outfields, the center fielder should possess excellent leadership skills, solid situational hitting, and commendable speed.

On a spot of the outfield to the right of a person standing on the home plate and looking towards the pitcher’s mound, you will find the right field. It’s home to the right fielder, who is assigned position 9 in the baseball numbering system.

The right fielder also backs up the first baseman on balls thrown by the pitcher or catcher. Besides, the player backs up the second base on throws from the left side.

A double play(DP) happens when two offensive players are pulled out in one play. The player position numbers denote the sequence followed in a double play.

A 4-6-3 double play starts with the runner on the first base.

Each of the baseball player positions requires a specific set of skills, with some being best suited for guys with particular dexterity. Nonetheless, you will note that dexterity is not a key factor for the center and right fielders.

The position numbers also denote the sequence of any of the several double plays you encounter in baseball, including the 4-6-3 two-out play.